THIS IS THE OLD WEBSITE. THE NEW ONE IS EVEN COOLER. IT ALSO HAS A SHOP.

It is with great excitement and joy that we welcome Obe Vermeulen to our team!

From this day forward, MINOR SCALE MUSIC is no longer a one-composer-publisher. Obe Vermeulen is a young and very promising composer from Ghent, Belgium. His pencil is fluid and original. His first pieces in our catalogue are 14 cadenzas for solo instruments , a true challenge for any professional player or advanced music student. Hopefully for many more to come!

New in our catalogue: a daily workout for woodwinds to enhance your technic. Get Back in shape before the band get’s back together! Find out all about it here:

This week, minor scale music will be at the 2nd International Blasmusikforschung Congress, in Neu-Ulm, Germany.

Last june I had the pleasure to adjudicate the conductors competition at the Mannheimer Musik Hochschule. At the occasion of the galaconcert, Toni Scholl conducted Sinfonietta #1 in a marvellous performance with his fantastic German Wind Philharmonic.

Next on is Rolf Schumacher, celebrating his 40 years of conducting with the Swiss premiere of the same piece in Bern, on the 14th of september.

14 days later, Rogelio Castro will lead his Banda Salasiana del Niño Jesus in the pan american premiere of the entire Symphony 1 KRKA in the national theatre of Bogotá, Colombia

Bart Picqueur is composer in residence at Clarinetfest 2018. Some new compositions as the lament for common man for Bass Clarinet and wind orchestra (Howard Klug / Belgian Guides) will be played amongst some older pieces, dressed in clarinet…

On the occasion of Clarinetfest 2018 in Ostend, Minor scale music is happy to host the Orquestra Potiguar de Clarinetes from Brazil.

2018 will be very exciting. Both the ECWO & the CIBM have chosen a Bart Picqueur test piece.

On may 27 2017 the European Championships for Wind Bands are Held at Bozar, Brussels. The jury elected Mutations (ed. Hafabra Music) as the mandatory piece. 9 bands from all over Europe will perform on the occasion. (ECWO)

The Board of the international wind band competition of Valencia, Spain, elected Sinfonietta #1 as the obligatory work for their honorary division. Sinfonietta #1 is the 23′ Resume of Symphony N°1 KRKA. (see CIBM)

Last saturday was the big day for Insomnia at the European Brass Band Chamionships in Ostend. 6 bands all had their own very different approach to the work. The Italian Brass Band was the well deserved winner with an excellent interpretation and superb performance. Thanks to all conductor’s and musicians for the great efforts in preparing the piece.

On saturday April 29, The challenge division is on at the European Brass Band championships. All bands will be performing the testÂ piece INSOMNIA, so it will be a world premiere multiplied by 7!

You can now order your study score for only â‚¬7 by sending an application to: EBBC@minorscalemusic.com 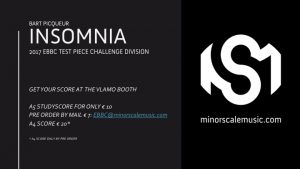